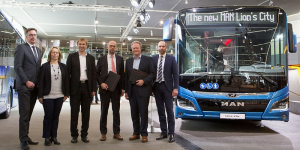 MAN Truck & Bus and Hamburg’s public transport provider VHH are jointly testing the second life of batteries first used in electric buses in a stationary storage facility. They signed a MoU in Munich.

MAN estimates its electric bus batteries to last about six years in active service, However, together with Verkehrsbetriebe Hamburg-Holstein GmbH (VHH) they want to come up with a reuse scenario. The idea of the trial is to put the used eBus batteries as energy storage units. The latter shall then serve as back up for an electric bus charging station at the depot.

It could be a perfect circle. The prototype of the stationary storage facility is to start operating in Hamburg-Bergedorf before the year’s end. Testing will work with batteries using the same cells that will be applied in MAN’s electric buses. This second life storage is designed to prevent power consumption peaks during bus charging (peak shaving) by filling up on charge during quieter periods, which the buses can then use at peak times.

The research is part of a partnership between the Free and Hanseatic City of Hamburg and the Volkswagen Group, which also includes MAN. The partnership has also initiated Volkswagen’s latest delivery of 50 e-Golf (we reported). Furthermore, MOIA, VW’s ride-sharing shuttle started a partnership with the Hamburger Hochbahn AG and is to arrive in town later this year. Part of the project is an app-based on-demand electric shuttle service that allows people heading in the same direction to connect.

Volkswagen teams up with Samsung and LG Chem

Rolls-Royce to look into supercap technology