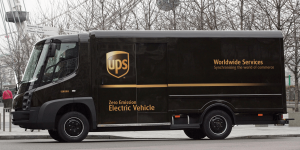 UPS has launched the ‘Smart Electric Urban Logistics’ (SEUL) initiative in London together with UK Power Networks and Cross River Partnership. Its new technology enables them to recharge an entire fleet of electric vehicles at the same time, thanks to stationery battery units.

For UPS, this set up is necessary in order for them to grow their fleet from 65 to 170 electric delivery vans in London and without upgrading the grid. Curently, the solution uses new batteries but in a next step, these may be replaced with batteries that were first used in UPS vehicles.

While such installations are not new, UPS believes its may be the “first time in the world on this scale.” The energy management comes from UK Power Networks Services that says it combines an “Active Network Management system with battery storage, ensuring the depot’s electricity demand will not exceed the network’s limit and prevent significant investment in network electrical infrastructure.”

Over in Germany, MAN and Hamburg’s public transport provider announced a similar prototype today. Their 2nd life energy storage and charging station is to use batteries from electric buses in order to charge e-buses in return rather than electric vans or small trucks.

The Smart Electric Urban Logistics project in partnership with UPS, UK Power Networks and Cross River Partnership has received funding from the UK’s Office for Low Emission Vehicles through a competition led by Innovate UK.