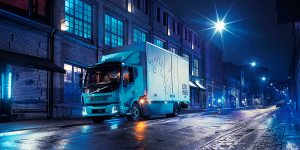 Volvo Trucks has finally released the technical specifications of their first fully electric truck. The Volvo FL Electric is designed for urban delivery routes, as well as communal service, such as garbage removal, and has a range of up to 300 km.

Officially the 16 ton e-truck will be presented in May at the IFAT in Munich, however the technical specs were released ahead of time for the truck which will be released in 2019.

The truck will have an electric motor with a top performance of 185 kW, and a regular performance of 130 kW. Energy storage will be covered by 2 to 6 lithium-ion battery packs, with a 100 to 300 kWh capacity. The batteries can be charged via CCS and will enable the mentioned 300 km range. In all likelihood, the batteries will be produced and delivered by Samsung.

The first two trucks will be taken into service by the trash and recycling company Renova and the Spedition TGM in Swedish Gothenburg. The sale and serial production of the Volvo FL Electric will begin next year in Europe.

Behind the offer by Volvo Trucks is the considerable experience of the Volvo Group in the area of electrified transport solutions. The sister company Volvo Buses has produced a total of 4,000 electrified buses since 2010. “With this model we are making it possible for cities that aim for sustainable urban development to benefit from the advantages of electrified truck transports,” says Claes Nilsson, president of Volvo Trucks.

A few weeks ago he already hinted at the benefits presented by electrified trucks; the drop of noise levels and pollution, the option to drive in cities late at night or during less busy hours would ease requirements on logistics operators, as well as benefit the communities they serve. First tests analyzing the effects of electrified trucks in urban areas have already been done in Stockholm in cooperation with the Royal Technical University titled “Off Peak City Distribution”. As trucks were not slowed by commuter traffic during off-peak hours, they were able to complete deliveries in about 1/3 of the regular time.