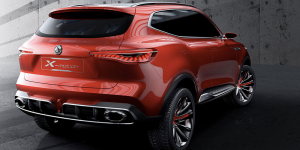 SAIC has begun construction on their fourth vehicle factory in China. The new production site will be built in the port city of Ningde and will begin operations in 2019, producing electrified vehicles for Roewe and MG.

The annual capacity of the new SAIC factory in the Fujian province is estimated to stsand around 240,000 vehicles. The construction costs for the state-owned factory are estimated too be around 5 billion Yuan, or 794 million euro. The batteries will be supplied by CATL.

SAIC managed to sell 44,236 electrified vehicles in 2017. That puts the Chinese auto manufacturer solidly behind the other national brands BYD and BAIC BJEV, who sold 113,669 and 104,520 EVs, respectively. In early 2017, SAIC invested around 1 billion dollars into the development of BEVs and PHEVs and announced a sales goal of 320,000 EVs for 2020. The other SAIC factories are in Shanghai, Nanjing and Zhengzhou.