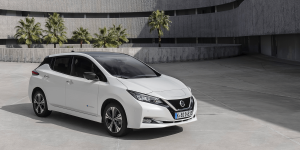 For Nissan, electric cars have proven a success over many years even though they are only selling the Leaf in the passenger car segment for now. The sensible electric car just recently got a make over and sales have increased since deliveries started on the continent.

By now, over 100,000 Nissan Leaf have been sold in Europe and Nissan says about 37,000 of those were the 2018 model generation that is made at their Sunderland plant in the UK.

Susana de Mena, the milestone buyer of the 100,000th Leaf comes from Madrid and her location played a role in her buying decision. Says de Mena: “We are very conscious that we must respect and protect the environment, so we knew we’d want to go 100% electric. On top of this, an electric car lets us get to the very centre of Madrid when ordinary vehicles can sometimes be restricted due to pollution issues.”

Madrid is about to introduce the so-called “Hyper Center” an ultra-low to no emission zone in the centre of the Spanish capital. This has led the industry to start making Madrid an EV sharing paradise with Bosch’s Coup having installed a large electric scooter fleet to share. Also carmakers have made Madrid a proving ground for electric car sharing with Zity or Car2Go running all-electric schemes.

For Nissan, Spain is only one market for their electric car in Europe, where they say one new Leaf is sold every 10 minutes. European Nissan Leaf customers have now driven over 2 billion kilometres and saved over 300,000 tonnes of CO2, according to the company. The electric car drivers also boast a 92% customer satisfaction rate, more than any other Nissan model – #rapidgate aside…