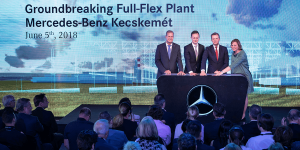 The German carmaker has broken ground in Hungary for their latest facility. Dubbed the first full-flex-plant because of its ability to adapt to various vehicle architectures, the 1bn euro facility is to start producing regular and electric cars from 2020.

Daimler has laid the cornerstone of its first full-flex-plant in Kecskemét, close to Budapest. It is Daimler’s second outlet in Hungary and the first full-flex-plant. The facility allows for making various types of cars, thus accommodating for both electric as well as conventional models.

Markus Schäfer, Board Member Manufacturing and Supply Chain explains: “With an investment of one billion euros, we are building in Hungary the first ‘Full-Flex Plant’ in the global production network of Mercedes-Benz Cars. In a ‘Full-Flex Plant’, several vehicle architectures from compact models to rear-wheel drive sedans and various drive forms, including electric vehicles, can be flexibly produced on one line.”

Covering an area of 382,000 sqm, the plant will have a press shop, a body-in-white shop, a paint shop and an assembly.

It builds on Daimler’s “Factory 56” principles introduced in February, that is basically informed by Industry 4.0 standards with an added focus on sustainable production and human rights. The first such facility is currently under construction in German Sindelfingen, where the Factory 56 will start producing top of the line EVs such as the next-generation S-Class and models of the EQ line (we reported).

Daimler hopes to create 2,500 jobs once the plant is finished in 2020. The Hungarian government is supporting the investment with a EUR 37.5 million grant, adding that the ratio of Hungarian supplier contributions to the Daimler plantʼs output rose to 50% in 2017 from 30% in 2016.

In Germany and Europe, Mercedes-Benz plans to supply all German with CO2-neutral energy by 2022. Today, new plants for electric cars in Europe such as the one in Hungary are already planned with renewable energy supply from the start.

Tesla board to remain, China factory to come (video)