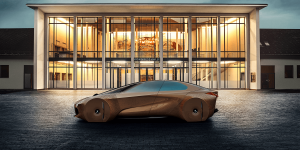 Harald Krüger, head of the BMW board, announced the contract with the Chinese battery manufacturer for cells valued at over one billion euros. The announcement came in an interview, where it was also confirmed that CATL will be opening a factory near Erfurt, Germany.

Krüger also used the interview to clarify a few initiatives hinted at by the company, as well as to comment on a few issues, which had been announced. The chief revelation was of course the billion euro contract, as the previous cooperation between the companies had been limited to China. CATL has been delivering batteries for the BMW X1 xDrive25LE for some time there.

From an e-mobility perspective, the planned CATL battery manufacturing facility in Germany is a major step for EV production in Europe. The battery cells produced there will supply the Dingolfing factory in Bavaria, where the iNEXT will be manufactured starting in 2021. In the interview, it was revealed that the choice of location for the CATL factory and the new contract are strongly related: CATL has decided to build the battery cell factory in direct response to the contract close to the Thuringian capital. At least this was reported by industry insiders – an official confirmation is still being awaited.

BMW is not only banking on CATL to supply their battery needs, however. Krüger also explained that BMW will continue to cooperate with Samsung. The Korean company had been the sole battery supplier for the Germans until now. The tactic to rely on multiple suppliers was explained by management as necessary for the planned 25 electrified models by 2025. Furthermore, BMW is considering the move vital to secure long-term resources for EV production.

Krüger further explained the current numbers for the company: BMW is still planning to globally sell a total of 140,000 EVs  this year. In the first months of the year, BMW marked a market growth for EVs of 40%. By the end of next year, Krüger aims to see a total of half a million BMW EVs on the world’s roads. The exact number for 2019 will be decided after the summer, when suppliers have confirmed their part. Krüger is also using the timing to position BMW and himself as an EV pioneer. When asked why BMW had been slow to join the EV market, he stated that the slowly changing framework conditions had slowed down the company.

CATL’s role in the electrified automobile industry has greatly grown recently. Volkswagen and Daimler set up supply contracts with the Chinese manufacturers for the I.D. series as well as the EQ brand. Furthermore, PSA and Renault-Nissan will likely be sourcing battery cells from CATL.