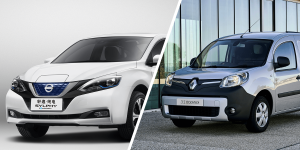 China’s battery specialist Contemporary Amperex Technology (CATL) is advancing to become not only Europe’s battery supplier No. 1 but also Japan’s. A new report says CATL will be taking over the battery cell supply for Nissan and Renault EVs in the near future.

According to Asia Nikkei, Nissan announced their intention to use the new CATL cells for their next serial production for the Chinese market, called the Sylphy. Renault is planning to use the cells for the incoming electric version of the Kangoo. It should not come as a surprise that the two companies are integrating CATL into their businesses simultaneously. The two car manufacturers are bound with a wide alliance (together with Mitsubishi) and recently even discussed a complete merger.

The Nissan contract also is the first contract CATL has made with a Japanese car manufacturer. Japanese, Korean and increasingly Chinese manufacturers have been splitting up the battery market between themselves. CATL is already supplying Volkswagen, PSA, BMW and Daimler, as well as setting up a French base in December. The base is tasked with expanding existing connections to European OEMs and to possibly create new ones. Looking at the growing relationship with Renault, it can be said the foreign venture is proving successful.

For the batteries CATL is to supply they will first be used by VW in their EV planned for market launch this year. Daimler has not mentioned a vehicle model or order volumes, but has stated that the choice to deal with CATL was based on the Chinese company’s willingness to undergo Daimler’s monitoring system to maintain standards such as not using child labor during resource procurement.

CATL is a renowned, yet fairly young Chinese battery manufacturer, which was founded in 2011 as a spinoff of the Hong Kong based Amperex Technology. According to reports, the Chinese authorities have also given the green light recently for CATL to hit the stock market. The battery specialists aim to generate around 2 billion dollars of fresh capital by going opening up for investment. The plan is expand manufacturing facilities for cell production, as well as creating new facilities in Europe and the USA. The most recent statements indicate that CATL is aiming for an output of 30 GWh in the coming year, and 50 GWh by 2020. In 2017 it was 23 GWh. The stock market exchange may happen as soon as this summer.