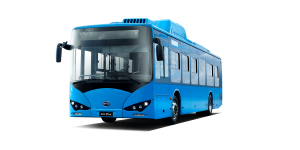 China’s BYD is becoming a serious player on the market home to Hyundai and Kia. In Korea, BYD electric buses are fully eligible for the electric vehicle subsidy. They have thus become very competitively priced, much to the dismay of the local industry.

Particularly in the light of China having applied restrictions on electric vehicles running on batteries made in Korea, that is by LG Chem and Samsung in other words, BYD receiving full government support is a critical issue.

The BYD electric buses however have convinced transit authorities in places like Jeju and now in Daejeon.

The Daejeon Metropolitan City Government decided to use BYD’s eBus-12 for its latest pilot project beginning later this year. Also because the bus is eligible to a government subsidy that shaves off about 200 million won (179,000 dollars).

In Jeju, BYD is already running an entire fleet and has established a dedicated little headquarter reportedly. On the islands, they operate the small eBus-7 model but the Chinese intend to bring more models to Korea.

“Starting from the eBus-12 in Daejeon and eBus-7 in Jeju, we will expand our presence in the Korean market with the nine-meter-long low-floor bus eBus-9, the e6 electric taxi and the T4 electric truck,” an official of EZwelfare, the Korean dealer of BYD, told the Korean Times.

This will not be amusing to local vehicle makers coming later to the game. The government in Seoul wants all buses and trucks to run with zero emissions by 2030 reportedly. This includes both battery-electric buses as well as those with fuel cells as built by Korea’s Hyundai. The company had announced to electrify their commercial vehicle line up recently. However, this will take time, possibly until 2022. Meanwhile BYD progresses at Chinese speed.