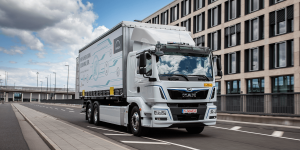 This September, MAN’s electric vehicle portfolio will swell. Apart from their electric van eTGE, the IAA Commercial Vehicles is to see the launch of an all-electric truck, the eTGM. Moreover, MAN will put their first electric bus on display in Hanover.

MAN says they thus represents the “entire scope of city logistics applications between 3 and 26 tonnes” with electric vehicles. Moreover, electric bus trials in cities all over Europe are imminent.

For Joachim Drees, CEO of MAN Truck & Bus AG, the urban environment is the most important field of use for electric commercial vehicles. He says for MAN it is clear, “the future of urban passenger and cargo transport is electric.”

So for actual vehicles, first up is the eTGM, an electric van MAN had presented previously as it is about to enter serious production alongside the VW eCrafter in Poland this month.

Then there is the MAN eTGM, an all-electric distribution truck. The 26 ton electric truck features a motor with 264 kW power and 3.100 Nm peak but MAN did not disclose any more details at this stage.

Apart from deliveries of goods, MAN is also looking at zero emission transport of people. Following the conclusion of development partnerships with Munich, Hamburg, Wolfsburg, Luxembourg and Paris, a prototype of the MAN Lion’s City E will also be on show for the first time at this year’s IAA.

The fully electric drivetrain delivers 160 up to a maximum of 270 kW. The battery is set up modular and relies on NMC chemistry. Charging only happens at the deport via CCS. MAN has not specified range but trials with the 29-seater are about to begin this autumn, when MAN plans to introduce a demo fleet of electric buses into everyday use. They will be deployed in various European cities before series production of the battery electric version of the new MAN Lion’s City can get under way.