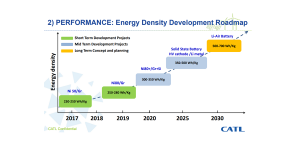 Battery maker CATL of China rushes to gain a competitive advantage over its Korean counterparts. The firm says it will be first to launch the new low-cobalt and energy-dense NCM 811 battery cells for electric cars next year.

While this move was also planned by Korea’s SK Innovation and LG Chem, their pouch cells have recently been delayed. Plans of SK Innovation to make batteries from nickel, cobalt and manganese that would allow a range of up to 500 kilometres for electric vehicles had first been made public in September 2017 reportedly. While the launch was scheduled for this year, the cells are being tested in more controlled scenarios such as electric bus and stationary energy storage for the time being.

CATL however is in a greater hurry and says their NCM 811 cells shall hit the market next year. Current CATL cells are NMC 532, which means the cathode is 20 % cobalt. With the introduction of NCM 811 battery cells the cobalt content per kWh is to halve while energy density is said to increase.

And CATL may find huge demand. The company had scored large supply agreements with mostly German carmakers recently. BMW agreed to buy cells worth over a billion euros and had recommended Erfurt as site for CATL European battery factory reportedly. The CATL battery production in Erfurt will run at full capacity from 2022.  They will also deal with clients such as Volkswagen and Daimler that set up supply contracts with the Chinese manufacturer for the I.D. series as well as the EQ brand. Furthermore, PSA and Renault-Nissan will likely be sourcing some battery cells made in Erfurt from CATL too.

However, who will benefit from the new NCM 811 cells prior to this remains to be seen. The Volkswagen Neo and maybe even the BMW i3 could be contenders for the new battery cells for electric cars.