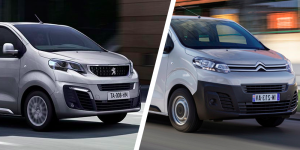 PSA has announced plans to electrify their entire utility vehicle palette by 2025. Starting in 2020, the Peugeot Expert and the Citroën Jumpy will be electrified, while the Citroën Berlingo Electric and Peugeot Partner Electric will receive larger batteries.

The French company has set their electrification focus particularly towards last-mile transportation in the logistics sector. The French government recently began debating setting up environmental zones in major cities, where only non-polluters would be allowed to drive, the focus seems prudent. The first two vehicles in the strategy to be electrified will be the Peugeot Expert and the Citroën Jumpy. Both are currently available in three sizes, have a load capacity of 4.6 to 6.6 m³ and a weight capacity up to 1.400 kg. Regarding the future range of the BEVs, PSA has not stated anything, but did mention plans to have battery capacities powerful enough to meet 85% of distance requirements by customers. The models will be built in the factory in Hordain, France.

As mentioned, the Citroën Berlingo Electric and the Peugeot Partner Electric will be updated. They are currently both fitted with a 22.5 kWh battery, putting them significantly behind Renault’s Kangoo Z.E., which features a 33 kWh battery pack. In the next step, PSA will then electrify the larger Citroën Jumper and Peugeot Boxer, which is based on the Fiat Ducato. This may also motivate Fiat to electrify their vehicle, as well.

A slight trend towards electrified utility vehicles has become noticeable in France recently: While the sales of electric cars has somewhat slowed over the past months, the sales of electrified utility vehicles has grown by 41% over the past half a year, with a total of 3,679 sales for the period. That makes for 1.5% of the total market, where Renault has taken the lion’s share with their Kangoo Z.E. In order to make up lost ground, PSA is renewing their product palette, as well as their rental system: In future, they plan to rent out electric utility vehicles for the same price as their combustion counterparts.