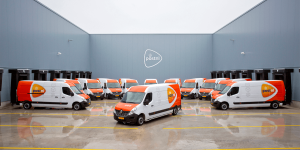 As part of the ceremony opening a new package sorting centre, PostNL has taken 15 Renault Master Z.E. into fleet operation in Amsterdam. The BEVs will be used to deliver packages to customers in urban areas in the city.

The Dutch post received their first two Master Z.E. in May of this year for use in their operations in Utrecht and Leeuwarden. The electric transporters are supposed to help PostNL reach their goal to deliver exclusively electrically in 25 Dutch inner cities by 2025.

The technical basis for the battery electric transporter is provided by the Renault Master with a combustion motor and front wheel drive in the 2.8 to 4.5 tonne category. The powertrain is taken from the electric Kangoo. The same goes for the 33 kWh battery, which powers the 57 kW electric motor. Top speed of the vehicle is set at 100 km/h, which is more than sufficient for city traffic. According to NEDC standards, the range is said to be up to 200 km, however Renault has stated a more realistic estimate to stand around 120 km daily range. A fast charging option was not included with the transporter, which means that the battery can only be charged with a type 2 charger with up to 7.4 kW. The charging time for a full charge has been announced to take six hours, which will require overnight charging at the depot.