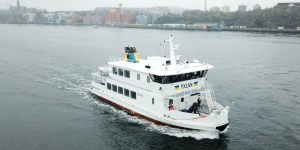 The 27.5-metre long hybrid ferry was designed and built by Baltic Workboats and can carry up to 150 passengers. It is equipped with two diesel-electric hybrid drivetrains, including permanent-magnet electric motors and generators. Performance data is not yet available, not even for the battery pack.

The project is the second cooperation between Danfoss Editron and Baltic Workboats. At the beginning of the year, a hybrid patrol vessel based on the partnership between the two companies was handed over to the Estonian border authorities. Danfoss project manager Kari Savolainen assumes that the demand for such ships will continue to grow as climate regulations become stricter around the world: “Electrifying marine transport is set to become a key trend and Scandinavian countries are leading the way.”

The decarbonisation of maritime transport has become a global mission for the shipping sector, as the International Maritime Organisation has decided to cut greenhouse gas emissions by at least 50 per cent by 2050. Sweden is particularly ambitious in this regard. As early as 2015, the Swedish Shipowners’ Association was one of the first players worldwide to commit itself to CO2-free shipping by 2050.