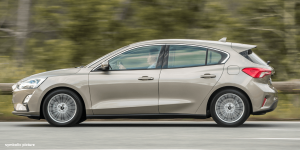 Ford is planning on restructuring their business in Europe, in order to improve their competitiveness as well as profitability. As part of this effort, Ford Europe has announced that beginning with the new Focus, each model series would receive an electric version in future.

This applies to both completely new models, as well as new variants of existing models, according to a statement by the company: “From Fiesta to Transit, either a mild-hybrid, full-hybrid, plug-in hybrid or full battery electric option will be offered”. Ford has never been more forthcoming. VW might also support the electrification efforts: Rumour has it that both carmakers are more closely considering a cooperation and that Ford aims to use Volkswagen’s modular electrification system (MEB), among other things, in the future.

Ford had announced changes to the management structure at the end of last year. Steve Hood will head the electrified vehicle business in Europe and will in future be responsible for developing strategies, new business models and plans for electrified vehicles and services. In this context, he is to put together a new team.

The restructuring plans now published also include plans to reduce staff and withdraw from weakening markets in Europe. For the former, Ford wants to structure their efforts “as far as possible, through voluntary employee separations “. According to their own statements, the carmaker is now entering into an official consultation process with the works council and trade unions. In Germany, Ford and the general works council are now negotiating the end of production of the C-MAX and Grand C-MAX at the Saarlouis plant. At the same time, France will see the end of the Ford Aquitaine Industries plant in Bordeaux, which is planned to end in August 2019.

And last but not least, a look at Ford’s previously announced electrification strategy: by 2022, the carmaker intends to invest eleven billion dollars worldwide in electrified vehicles, including battery-electric models, as well as plug-in hybrids. Production of the Mondeo Hybrid Wagon, which will complement the existing Mondeo Hybrid, will begin in Europe shortly. In addition, Ford Europe 2019 will also begin with the introduction of 48-volt mild hybrid vehicles and the production version of the Transit Custom as a plug-in hybrid. In 2020, the Group also plans to launch a fully electric SUV with an expected range of at least 480 km, and two other fully electrified vehicles.