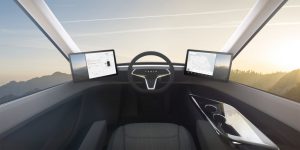 The EV maker has received another order from Europe for the the Tesla Semi. Duty-free retailer Travel Retail Norway has ordered two electric trucks to move goods from the warehouse to major airports.

The zero emission heavy weights will run between the warehouse and the stores as well as deliver goods from Europe. TRN’s warehouse boasts solar panels that generate enough power to also charge the Tesla EVs with renewable energy.

When this will be is another question though. Tesla has been running test with semi trailers in California but the start of production remains unclear. Moreover, first deliveries will be to customers in North America. Here, so far the largest orders have come from UPS that want 125 electric trucks reportedly. In Canada, Walmart expects delivery of 30 such Semis.

Tesla had opened the order books for clients in Europe in December 2017, then prioritising strong EV markets such as Norway and the Netherlands as well as Great Britain.