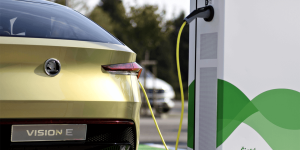 Škoda is currently in the middle of preparing for their electric launch, which will begin this year with a plug-in hybrid version of the Superb and a fully electric Citigo. Next year, the battery electric Vision E coupé will follow.

The Czech car manufacturer has been investing massively ahead of starting the electrification campaign with about two billion euros earmarked for the development of electric vehicles and mobility services.

In 2018 alone, Škoda spent 3.4 million euros in the expansion of their production facility in terms of electric infrastructure in Mladá Boleslav, Czech Republic. More than 300 charging points were set up, including more than 220 AC chargers and 80 DC chargers. The company is also planning cooperation with the energy provider ŠKO-Energo to extend its charging infrastructure beyond the borders of the factory.

Škoda’s electric strategy includes both hybrids as well as fully electric vehicles and will see roll-out spread over several years. This year, their first battery electric and hybrid models will be released, with the serial version of a concept introduced in 2017 rolling out next year. The company has not rested on their success and has been following up with the PHEV Vision RS, as well as mobility projects in Prague, the capital of their native Czech Republic.

The first fully electric vehicle to be introduced later this year is based on the MEB platform by the VW Group. The Vision E features two electric motors with a system output of 225 kW. A range of up to 500 km should be possible thanks to a liquid-cooled lithium-ion battery, says Škoda.

Update 20.03.2019: As part of the announcement of its delivery figures for 2018, Škoda has provided an update on its planned electrification offensive. As mentioned above, it will begin this year with a battery-powered version of the Citigo and the Superb PHEV. By 2022, Škoda will then present a total of over 30 new models, more than ten of which will be electrified. These include the purely electric Vision iV, which recently made its debut at the Geneva Motor Show and will be Skoda’s first electric model based on the Volkswagen Group’s MEB platform. The Vision iV shares many optical features with the Vision E concept already presented by Škoda in 2017. By the way, the drive and battery data match with those of the Audi Q4 e-tron concept. The BEV is to be launched on the market next year. But according to the carmaker, the one model based on MEB is not to remain the only one. In addition to electric vehicles, the plant in Mladá Boleslav will also produce electric components for plug-in hybrid models of several Volkswagen Group brands from 2019.