A total of 48 publicly accessible hydrogen filling stations were put into operation worldwide in 2018. Seventeen of them are located in Germany. Japan still has the largest number of public H2 fuel stations (96), ahead of Germany (60) and the USA (42).

This is the result of the eleventh annual evaluation of H2stations.org, a website of the German Ludwig-Bölkow-Systemtechnik and TÜV Süd. Germany experienced the largest growth with 17 new hydrogen filling stations.

Nine new locations were added in Japan in 2018 and ten in the USA (including six in California). According to Ludwig-Bölkow-Systemtechnik, there are currently a total of 152 hydrogen filling stations in Europe, 136 in Asia and 78 in North America. Of these 369 filling stations, however, only 273 are public, while the remaining locations are reserved for closed user groups.

In an accompanying press release, TÜV Süd also speaks of “significant innovations in concrete expansion planning” with regard to the Netherlands (17 planned filling stations), France (12), Canada (7), South Korea (27) and China (18). In contrast to South Korea and Japan, which mostly host fuel stations for fuel cell electric cars, China will first set up an infrastructure for FC buses and small distribution trucks.

In addition to government initiatives, some companies themselves are also driving forces: Hyundai, Nikola Motor and Toyota are both working on the development of FC trucks and their fueling infrastructure.

If we focus the lens on Germany, then in addition to the current number of 60 hydrogen filling stations there are plans for 38 further locations, 34 of which are being developed under the auspices of the H2 Mobility Germany industrial initiative. Their website specifies that four of these future sites are in the planning phase, ten in the approval phase, eleven in the execution phase and nine in the commissioning and trial phase. It also states that the current demand for hydrogen in Germany is around seven tonnes. 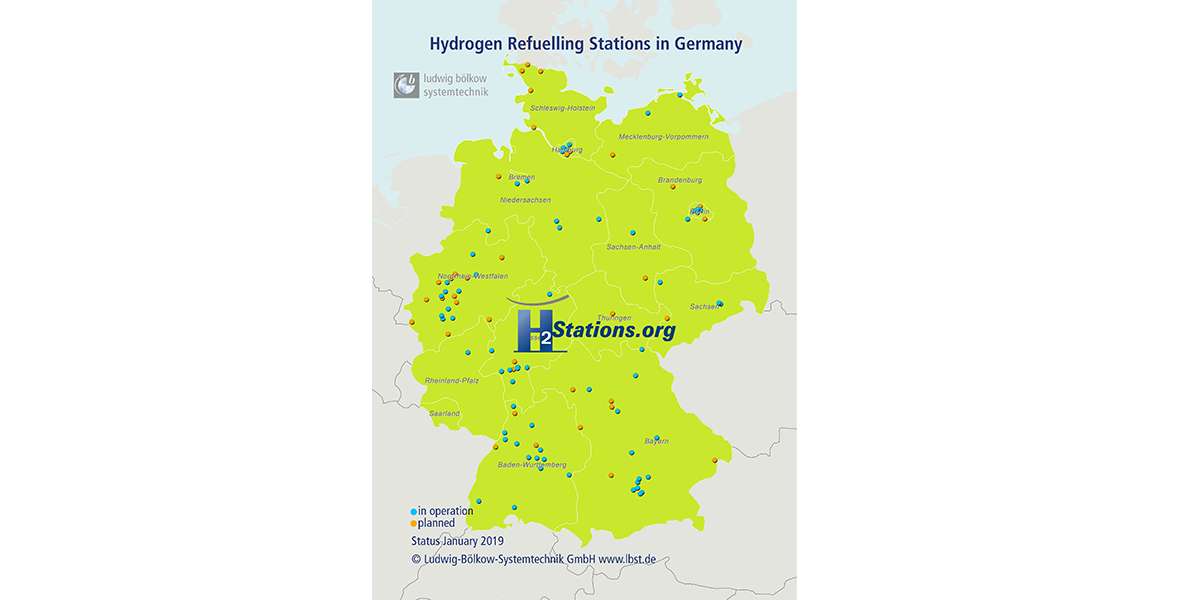 In 2018, four start-ups in eastern Germany took a further step towards a nationwide hydrogen infrastructure, and thus towards a “densification of the hydrogen corridors from east to west and north to south in Europe,” writes the TÜV, which also highlights three H2 filling stations in Schleswig-Holstein as a special project, as their hydrogen is generated by electrolysis in nearby wind farms.

With regard to Europe, the initiators of the report speak of the previously mentioned 152 H2 filling stations, whereby no distinction is made here between public, semi-public and non-public. H2 Mobility Germany operates a live map for Europe and currently lists 99 hydrogen filling stations in operation, eight currently out of operation and 51 in implementation.