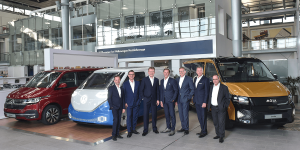 Volkswagen Commercial Vehicles (VWN) announces that it intends to spend more than €1.8 billion in the current year 2019 on converting its plants, establishing new business areas and developing new vehicles – the latter with a focus on electric drives.

VWN has set its targets in what they have called the GRIP 2025+ strategy. The central aim of the Hanover-based company is to evolve from a pure car manufacturer to a mobility provider. In this respect, the strategy paper covers all current topics from climate protection and digitization to mobility services and autonomous driving. Particular focus is also placed on electric mobility. As Dr Thomas Sedran, Chairman of the VWN Brand Board, emphasizes, Hanover will become a showcase plant in this respect, “The future of the Hanover location is thus secured,” he says. “The location is and will remain the headquarters of our brand.”

According to VWN, the most important product and symbol of change is the ID. Buzz, which will be built in Hanover from 2022. “But because no one can predict exactly how quickly customers will accept our e-vehicles, we will maintain a high degree of flexibility at the Hanover plant in the coming years,” Sedran says. “We are preparing for the production of battery electric vehicles. At the same time, we can continue to build multi-vans with combustion engines, including plug-in hybrids.” That doesn’t sound like the BEV march that VW CEO Herbert Diess has been drumming these days.

The VWN brand boss comments on this by announcing that the balance for larger and heavier vehicles must be more differentiated: “Here, for example, synthetic diesel fuels from renewable energy sources are a very sensible transitional solution. The same applies to hybrid drives, which we will be offering for the future T7, for example. In the long term, we will also continue to pursue the fuel cell drive because it is an efficient, ecologically and economically extremely sensible technology, especially for large vehicles.”

The new generation of the T7 van will not be launched on the market with a purely electric drive as assumed, but will only be available with a plug-in hybrid drive from 2021, in addition to the diesel and gasoline engines. However, the facelift being given to the T6 (called T6.1) will be available as an electric version from autumn this year.

Analogies with VW’s passenger car strategy cannot be dismissed. For example, the Wolfsburg company has also not planned an electric version of the Golf 8, but the ID.3 will be available soon. The same applies to the T7: the new generation of the van will not be available as a BEV, but customers will have the ID. Buzz in prospect.

As far as new mobility services are concerned, VWN wants to make use of the know-how of the still young VW subsidiary Moia, which is known to rely on fully electric shuttle buses based on Crafter. Basically, the group-wide development in the field of autonomous driving is to be bundled in Hanover in the future.