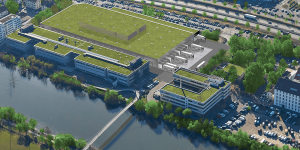 Daimler company Mercedes Benz Cars has now begun construction work on the planned battery sub-plant on its Brühl site situated at the company’s home grounds in the Stuttgart district of Untertürkheim. Batteries for future electric vehicles of the EQ family will soon be assembled on an area of 12,000 square meters.

The sub-plant is to be inaugurated as part of Mercedes-Benz’s own global battery production network. “The laying of the foundation stone (…) is a good signal for the sustainability of mobility and a commitment to the location,” says Daimler CEO Dieter Zetsche. “Battery factory at the Brühl sub-plant stands for our promise to make both our cars as well as their production even greener. In future, we will assemble the heart of the electric car – the battery – here ourselves”

Daimler is investing more than one billion euros in the battery production network being set up under the umbrella of Mercedes-Benz Cars. This currently consists of nine (planned) factories at seven locations on three continents: In Germany, a battery assembly plant has in operation since 2012 in Kamenz, Saxony, and a second battery factory is being built there that is scheduled to start operation this spring. Then there are the three plants in and around Stuttgart; a planned plant in Sindelfingen, near Stuttgart, plus the two sub-plants in the Stuttgart districts of Unterkücken and Hedelfingen, which includes the Brühl sub-plant mentioned above. Overseas battery production is currently under construction in Beijing (China), in Tuscaloosa (USA) and in Bangkok (Thailand). Jawor in Poland will be added as the ninth location at the beginning of the next decade.

The current e-mobility offensive at the company’s home base grounds in Untertürkheim, Stuttgart was preceded in 2017 by a long dispute between the management and the works council. Both sides finally agreed to further develop the plant into a “high-tech location” for electrical components. Against this background, it was decided to establish a new battery assembly facility on site as well as the assembly of electric drive modules for front and rear axles. Currently, 19,000 employees work in the six parts of the Untertürkheim grounds.

Michael Häberle, Works Council Chairman Mercedes-Benz Untertürkheim Plant said that: “Many colleagues working in gasoline and diesel engine production have to be qualified for the new alternative powertrains and especially for working on the high-voltage systems. We have signed a job security agreement with the company through to the end of 2029. That is why investments in issues with long-term prospects are necessary at the location. This includes today’s ground-breaking for the battery factory.“

The battery production network is a key element the Mercedes-Benz Cars strategy to electrify its entire portfolio from 2022 and offer various electrified alternatives in each segment – including more than ten purely electric cars. The Stuttgart-based company assembles the batteries itself and purchases the cells required for this from CATL, among others.