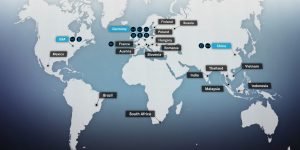 Mercedes-Benz has broken ground for its new battery plant in Tuscaloosa, USA, which will form part of their global network of production hubs. The carmaker is investing a total of $1BN at the site, which will begin building batteries for the future EQ series.

The battery factory is being built on an area of over 90,000 square meters, some 10 kilometres away from Mercedes’ existing Tuscaloosa car plant. This is where the electric vehicles of the EQ product and technology brand will roll off the assembly line in future, which also explains the decision to locate the battery plant there.

To date, the US production facility supplies customers worldwide with the SUV models GLE, GLS and GLE Coupé. With the imminent start of production of the next SUV generation, the plant will initially expand its portfolio with plug-in hybrids, and shortly thereafter purely electric models will also roll off the assembly line there. The production of EQ models in Tuscaloosa is expected to start at the beginning of the next decade. The battery plant is also scheduled to go into operation at this time.

The future factory is Daimler’s fifth battery assembly plant. In total, Daimler has announced to spend over one billion euros on setting up its global battery production network, which consists of eight existing and yet to be built factories in Kamenz, Stuttgart-Untertürkheim, Sindelfingen, Beijing, Bangkok and Tuscaloosa.