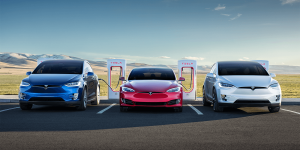 Tesla apparently plans to switch from the three-phase asynchronous to the reluctance motor on their Model S as well as the Model X. As far as the Model 3 is concerned, it looks as if the first U.S. deliveries of the new basic version are still to come.

But first to the motor: After Tesla has completed the switch from three-phase asynchronous motors to reluctance motors with permanent magnets with the Model 3, the Californians want to use permanent magnet reluctance motors for the Model S and Model X in the future, according to Electrek. Currently, the company is working on a corresponding drive upgrade under the code name “Raven”, which Tesla hopes will increase the efficiency of the Model S and Model X.

The new drives may also be accompanied by other hardware upgrades to increase the charging speed of the Model S and Model X, according to the above-mentioned report. According to Tesla’s official figures, sales of the two premium cars fell significantly in the first quarter of 2019. It is likely that the carmaker wants to make them more attractive again through undertakings such as changes in the vehicle’s engines, or the interior design update that was announced earlier.

There is also news that the basic version of the Tesla Model 3, which started selling in the U.S. in early March, still has not arrived without any apparent reason. The Californians are working on a new software update for the Model 3, which should make it possible to drive at higher speeds for a longer period of time. The performance version of the update is also said to be upgraded to a higher top speed.

Meanwhile, Elon Musk has announced on Twitter that details of the planned “Tesla Network” mobility service will be revealed on 22 April, with which customers will be able to temporarily lend their Teslas as a source of income.