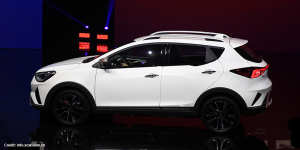 Reuters reports this with reference to local authorities in the province. The report also cites a spokesman for the joint venture, saying that the approval is “orderly advancement of the project” and that the company would launch its first electric model this year. The EV in question will be the E20X, a modified offshoot of JAC’s iEV7S compact electric car. The model will run under the SOL brand introduced at Auto China in April 2018 and created to sell EVs in China.

Back in winter, the joint venture in Hefei laid the foundation for a research and development centre focusing on electrification, connectivity and autonomous driving. The ground-breaking ceremony took place in mid-December, just two weeks after Volkswagen, JAC and Seat signed a statement of intent to jointly develop electric vehicles. The partners intend to launch the Seat brand on the Chinese market in 2021. The Spanish VW subsidiary had already joined the China joint venture JAC-Volkswagen in mid-2018.

And the ties between Volkswagen and JAC could become even closer: Just two weeks ago, it was also announced that Volkswagen was examining the purchase of a large stake in the Chinese joint venture partner and had engaged Goldman Sachs as a consultant for this purpose. Until now, VW had mostly relied on its long-standing partnerships with FAW and SAIC. Among other things, the Wolfsburg-based company is currently setting up an electric car plant in Shanghai with SAIC to build Audi vehicles from 2020.

Within two years, Volkswagen plans to launch more than 30 new models with electric and plug-in hybrid drives on the Chinese market, half of which will be produced locally and the other half imported. The Group’s goal is to deliver around 400,000 electrified vehicles by 2020 and increase this figure to 1.5 million by 2025.