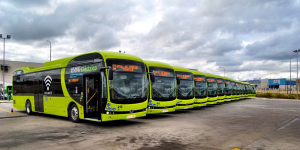 According to BYD Europe, the electric buses for Badajoz are twelve metres long and equipped with iron-phosphate batteries, which are advertised with a range of up to 250 km. The customer is Tubasa, a public transport operator active in Badajoz and a subsidiary of the Spanish Grupo Ruiz. According to BYD, the delivery will make the city in the southwest of the country the “largest user of electric buses in Spain”. Tubasa has installed 15 charging points in advance to charge the 15 new electric buses.

Furthermore, the handover of the eight electric buses ordered by Tusgsal for Badalona is imminent. These are also solo buses with a length of 12 metres. BYD has also received orders from bus companies in Madrid and Valencia. In addition, eight electric buses are to be delivered to the Portuguese city of Coimbra in just a few days.

“Our potential in the Iberian market is rapidly growing with consecutive orders from Spain and Portugal,” says Isbrand Ho, Managing Director of BYD Europe. 32 Chinese electric buses are expected to be in operation in both countries by summer.