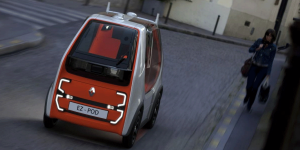 Based on the Twizy, Renault presented a new micromobile for transporting people and goods over short distances called the EZ-POD. The concept vehicle is battery-powered and fully automated. The pods can also be joined together to form convoys for transporting larger groups.

The EZ-POD offers space for two people sitting diagonally opposite each other, with a wide opening side section for comfortable boarding and alighting. Operating elements such as the steering wheel or pedals are not provided.

The design is inspired by Renault’s Robo-Taxi concept EZ-GO, the modular concept comes from the fully autonomous logistics concept EZ-PRO. According to the French, the miniature battery electric vehicle occupies a floor space of only three square metres and is suitable for operation in the city as well as in shopping centres, company premises or large hotel complexes, for example.

In addition to the passenger transport option, Renault also offers a “first mile and last mile” freight transport option, for example for use in logistics centres or on final kilometres of delivery to the customer. “The vehicle’s low speed and earliest usage scenarios made it feasible to rationalize the number of sensors,” according to an accompanying press release. However, Renault does not reveal how fast or slow the battery electric vehicle travels. Specifically, a camera and lidar detector scan the area in front of the vehicle, flanked by long- and short-distance radar sensors at the front and rear. The equipment for autonomous driving is completed by a GPS receiver to determine the vehicle position in real time and two antennas on the roof for networking.

The press release did include the following potential uses for the vehicle, adding in a possible speed limit for use in pedestrian areas: “In the future, the Renault EZ-POD could be authorized to drive on some pedestrian streets, or to advance – at very low speeds (under 6 kmph) – right up to the entrance of buildings and houses to drop off people with limited mobility.”