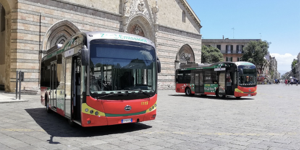 “The use of electric buses,” said Transport Council and Deputy Mayor Salvatore Mondello, “reduces pollution and promotes sustainable mobility. We are proud that Messina becomes one of the leading cities from this point-of-view. We want to continue to focus on sustainable and technologically advanced transport”.

In Italy, BYD is gaining ground and, according to their own figures, has now secured over 50 per cent of the total electric bus market in Italy. However, other companies are holding their own: Solaris delivered several electric buses in Bolzano last year, and this year twelve fuel cell vehicles will follow.