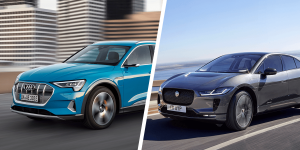 Due to the danger of battery fire and potentially faulty software in the regenerative braking system, the Audi e-tron and Jaguar I-Pace are being recalled to workshops in the USA and Europe as well. Audi confirmed that all vehicles that have been delivered so far are affected.

When the news first came, the voluntary recall of the Audi e-tron Quattro was said to affect 540 vehicles in the USA according to the Ingolstadt-based company, i.e. around half of the cars delivered there. However, according to Bloomberg, the recall affects 1,650 Audi EVs in the States. Moreover, a spokesperson later confirmed to electrive.net that the potential problems affect all 7,000 cars, also in Europe.

With the e-tron, moisture could potentially penetrate individual battery cells via the charging socket due to a fault in the wiring harness, which could lead to a fire. So far, no fires have been reported, but in five cases the battery fault warning light is said to have been triggered due to the accumulation of moisture.

Audi assumes that a repair method will be available by August. Repairing faults in the wiring harness is time-consuming, as the cables, which are several kilometres long, are integrated deep into the vehicles.

For the Jaguar I-Pace, the problem is not the hardware. With the British electric car, there is a problem with the software for the recuperation. In the I-Pace, recuperation and disc brake work hand in hand – even if the driver depresses the brake pedal, the initial deceleration is electric until the mechanical disc brake takes over.

This is precisely where an error can get dangerous: If the electric braking system fails, there will be a longer delay between the driver braking and the vehicle braking. For this reason, specific safety requirements are not met. According to a statement by the US traffic safety authority NHTSA, some 3,000 Jaguar I-Pace vehicles, or more precisely the 2019 and 2020 model years, will have to be recalled.

Jaguar wants to solve the problem with a new software update. Since the I-Pace cannot receive updates “over the air”, the vehicles will have to go to the garage. The recall is expected to begin on 1 July.

Prices are out for Hyundai’s new all-electric Ioniq