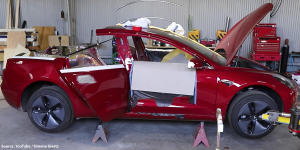 Simone Gierz, US YouTuber, originally from Sweden, said she couldn’t wait for Tesla to bring out their planned pick-up truck. So she put together a team of mechanical artists and took to a Model 3 for a bit of mechanical body modification.

Simone Giertz, the self-titled “Queen of Shitty Robots” who studied engineering physics and is now a renown YouTuber, has taken on projects like turning an electric car into a gigantic computer mouse.  In order to make the “Truckla”, Giertz put together a team that included Californian mechanic and artist Marcos Ramirez, Tesla DIY enthusiast Richard Benoit (known on YouTube as Rich Rebuilds), and German  mechanical designer/YouTuber Laura Kampf.

In the 31 minute video below, Giertz and the Truckla team get down to business. For those without much time, we’ve highlighted the action sequences: Taking out the top window: 13:55, removing rear beams: 17:03, making the truck bed: 17:57, restructuring work: 18:36, structuring done before finished bodywork: 22:20, first sight of vehicle, ready for Truckla commercial: 25:22.

At the end of the video, Giertz maintains that while it looks great, she plans on cleaning up the interior, doing some bodywork and making sure the Truckla is weatherproof. To see the finished Truckla in action: Watch the advertisment: Truckla – Available Nowhere!

Needless to say, the press resonnance of this bit of mechanical atistry, creative thinking and great team work is already big and loud – TechCrunch wrote: “the final product looks terrific — both in terms of the detail work and in terms of its functionality … and potentially better than whatever sci-fi nightmare Elon Musk is putting together for the actual Tesla pickup.”

However, Giertz has proved that necessity is indeed the mother of all invention, so in Germany, we’ll be looking towards the likes of Laura Kampf to get a flex and a welding torch into some German brand electric cars to make us get us some edgy, kick-ass, practical vehicles. Be brave. All teams go!

Darling, Tesla has soiled herself again

Spider-Man and e-tron team up