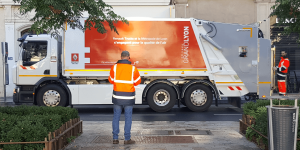 The 26-tonne D Wide Z.E. truck presented by Renault Trucks almost exactly one year ago is now being used in the Lyon area. The first pre-series model of the electric truck will be used for waste disposal in Meyzieu.

The D Wide Z.E. is a variant specially optimised for waste transport – as a 16-tonne D Z.E. it is also available as an electric truck for distribution operations. According to Renault, waste disposal is an area of application for which electrification is particularly suitable. Waste disposal vehicles have to drive in a stop-and-go motion, with somewhere between 300 to 800 stops per operation. This results in high consumption and increased fine dust and particle emissions due to rapid material wear. In electric vehicles, which mainly use the engine for braking, the braking system is therefore subjected to less stress.

The 26-tonne Renault Trucks D Wide Z.E. has two electric motors with a total output of 370 kW and a constant output of 260 kW respectively. A battery pack with a capacity of 200 kWh will be used as an energy storage device, which should enable a real range of up to 200 km. With direct current, the lithium-ion batteries of the electric truck can be fully charged in one to two hours via a CCS plug with 150 kW charging power.

However, Renault is not alone with an electric truck for waste disposal: As early as April 2018, Volvo presented the FL Electric followed shortly after with the FE Electric for heavy distribution tasks and waste disposal in cities, now both in operation.