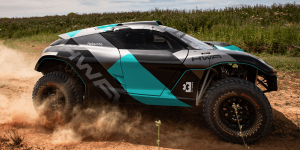 In the current Formula E season, which ends this weekend with two races in New York, HWA Racelab has formed the vanguard for a Mercedes-Benz factory assignment. The race team from Affalterbach, which emerged from Mercedes subsidiary AMG, has already gained experience with the all-electric powertrain with a full season in Formula E, on which Mercedes will build. AMG was once co-founded by Hans-Werner Aufrecht and later taken over by Mercedes. Aufrecht is also the founder and namesake of HWA.

After the “relay handover to the Mercedes-Benz EQ Formula E Team”, as HWA put it in a press release, the racing team apparently found the next project in the Extreme E. The team is now in the process of developing a new project for the Formula E Team. “We are looking forward to Extreme E. This is an even bigger adventure for us than when we joined Formula E last year,” says HWA boss Ulrich Fritz. “We are impressed by the concept and the people behind the series. We have got to know them in Formula E and have worked very well with them”.

Fritz means, among others, the Formula E founder Alejandro Agag, who also conceived the Extreme E. “HWA is a highly successful operation and a major, title-winning name in motorsport,” says Agag. “so it is fantastic to be able to welcome them into our Extreme E family.”

From January 2021, twelve teams will be competing in Extreme E in tournament mode. The off-road stages take place under the toughest conditions – from extreme heat (Sahara) and humidity (Amazonas) to high altitudes (Himalayas) and freezing temperatures (Arctic). The broadcasts of the races are designed as a documentary sports TV series. In addition, Extreme E is committed to climate neutrality and contributes to the restoration of damaged ecosystems at all venues.

Agag recently presented the Odyssey 21 at the “Festival of Speed” in Goodwood. Initially, the teams are allowed to modify the bodywork to adapt the look to the manufacturer’s series SUV. Later, the development of further parts, for example of the powertrain, will be released in analogy to Formula E. The development of new parts will also be carried out in the near future. However, the battery will remain a standard component.

It had become apparent that HWA would not hang the charger cable on the hook after one year in Formula E. The battery would be replaced by a battery. The company had invested heavily in electric motorsports at its location in Baden-Württemberg – among other things, the entire workshop was equipped with a special insulating floor to make work on electric racing cars safer. HWA Racelab forms the operational team of HWA AG. HWA was responsible for the DTM application of Mercedes for many years. After the car manufacturer withdrew there, HWA participated in Formula E, Formula 3 and Formula 2.

“The Extreme E project is a great opportunity – for us as HWA, for the technological shift towards more E-mobility, and for a more conscious approach to the environment and finite resources,” says Fritz. It is not yet clear whether it will end up like Formula E, with Mercedes later taking over the Extreme E at the factory.

They are not the only Formula E team switching to the new series, as Venturi also confirmed their interest. At the first presentation of the Extreme E, Agag stated that it would be in contact with nine manufacturers.

ABT Sportsline also just announced their intention to compete in the race. ABT is a world market leader for tuned Volkswagen vehicles, and also very successfully competed in the Formula E, being the team behind Lucas di Grassi’s championship in 2016-2017. Alejandro Agag seemed very positive about the third confirmed team in the Extreme E: “The unique challenge offered up by Extreme E with its formidable environments, head-to-head format and the need for real engineering ingenuity undoubtedly acts as a major draw for those with competition at their core. I can’t wait to see how ABT Sportsline respond to that challenge.”

Aiways is planning to launch in Europe in 2020