In detail this means, Ford will use the MEB platform to launch at least one electric car in Europe. Another model is not far off. More so, for Volkswagen the cooperation is strategic. The official communication is titled “Together with Ford to the Future” and for Volkswagen, this means not only a large scale contract – Ford wants the German corporation to supply 600,000 MEB platform and components, including the battery packs. Moreover, a second model is being discussed and VW CEO Herbert Diess describes the strategic goals as follows:

“Firstly, we want to establish MEB as the industry standard for electric vehicles. Secondly, we want to become the market leader for light commercial vehicles and mid-size pickups. And thirdly, we want to participate in the rapidly growing market for mobility services. Once the vehicles are autonomous, many new business opportunities will open up.”

Volkswagen and Ford want to accomplish said autonomy through Argo AI. VW is investing 2.6 billion dollars in the Ford subsidiary developing systems for autonomous driving. With this investment, VW and Ford will become equal owners of Argo AI in the future. Volkswagen will also contribute the existing Audi Autonomous Intelligent Driving (AID) unit to the venture.

But back to the MEB. While 600,000 electric vehicles made by Ford will enter the market in Europe latest in 2023, Volkwagen’s scale-up overpowers the licensing by far. Says Diess: “We intend to produce around 15 million vehicles on the MEB in the next ten years. Volkswagen is already developing and producing 27 different models on the MEB platform in the first wave. By 2028 there will be almost 70 models.” 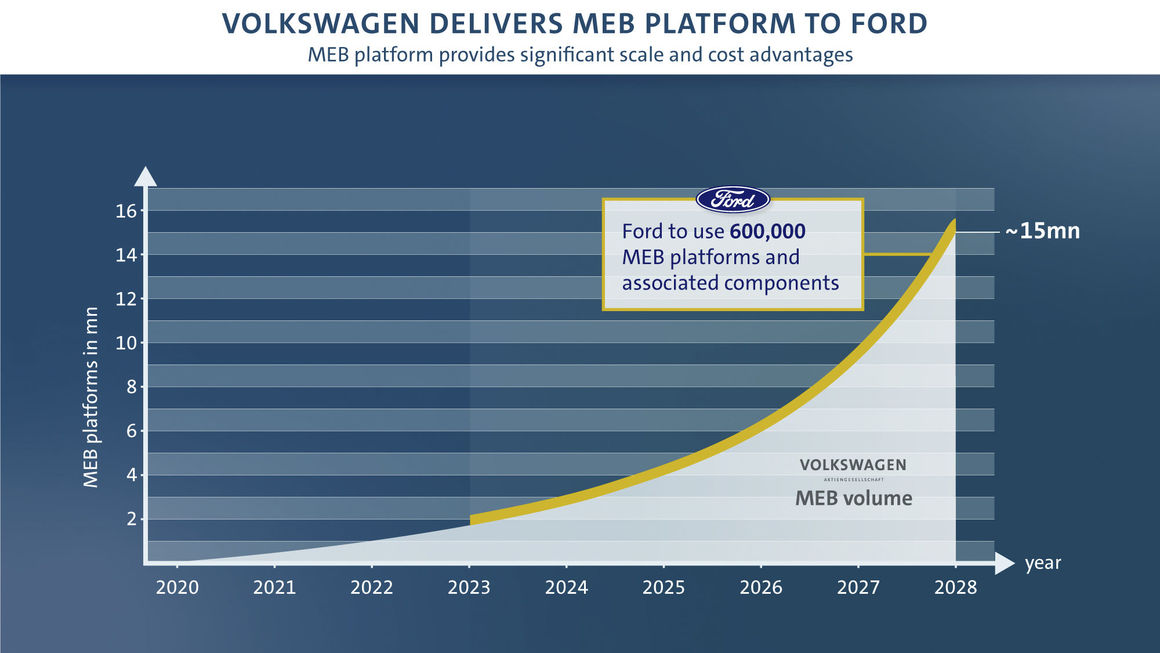 The above graphic shows the difference in scale of the company’s commitment to MEB. However, Diess added that the partners “are currently discussing a completely new supply contract for a second vehicle. This could almost double the supply of our MEB platforms to Ford.” The US company echoes this in its official communication and speaks of the deal as including “at least one high-volume fully electric vehicle in Europe”.

Ford will be the first volume manufacturer to make use of Volkswagen’s modular platform for electric cars and thus the latter has created a good starting position. The “skateboard” module, which houses the battery, engines and chassis, can be tuned to give the electric cars a different character – from the sporty Audi to the more comfortable VW. The passenger cell (also the “hat” in Volkswagen speak), allows for a number of custom designs.

The price for this freedom: The development costs were in the billions. This makes sharing some of the financial burden with Ford (and perhaps others) a prudent decision. However, none of the partners disclosed the value of the final agreement.

No matter how much though, Ford it is under pressure since the hapless Focus Electric, there has been no fully electric model and the current fleet consumes too much. From 2021, there is an incoming threat of high fines in the EU and for Ford, VW is the quickest way to more electric vehicles as suggested before.

Already in January Ford and VW agreed on a joint production of pickups. Ford has been leading the American registration statistics for years with models like the F-150, while VW does not offer any of the flatbed models popular in the USA – the Amarok built in Germany is too small for the US market. Volkswagen wants to use Ford’s plants and experience to gain a foothold in this segment.