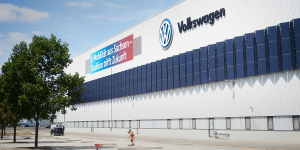 Starting from August, the first of two assembly lines for the production of Volkswagen’s all-electric ID. models will be ready to go in Zwickau. The body shop, paint shop, assembly and infrastructure have all been extensively modernised and renewed.

The second production line at the site will be revamped to produce the same model by the end of 2020. In the final expansion stage, 330,000 fully electric cars per year are to roll off production lines in Zwickau from 2021 onwards.

Six electric models are planned for the three Group brands VW, Audi and Seat. Since six models are to be built in Zwickau and the maximum capacity utilisation is to be increased from 1,350 to 1,500 vehicles per day, employment at the location will remain stable, according to VW – even if electric vehicles are less expensive to build.

After the plant holidays, the first production line should be ready in August. The first work began in the summer of 2018 when the production lines were modernised. Since then, the plants in other parts of the plant have been overhauled, replaced and prepared together with the logistics department for the MEB’s requirements. Among other things, the entire conveyor technology in the plant had to be prepared for electric cars.

A few weeks ago, VW indicated how complex the logistics were for setting up for electric vehicle production. At the time, at the start of pre-series production of ID.3, the Group announced which components were being supplied by the Group Components division – for example from Salzgitter, Hanover, Braunschweig, Poznan, Wolfsburg and Kassel.

In the course of the modernisation, the energy supply at the Zwickau plant was also converted. A total of six projects are to keep production there largely CO2-free. In addition to the obvious use of green electricity, the halls are also to be better insulated. The remaining energy demand, which is not drawn from the power grid, is generated by VW itself in a block-type thermal power station. The natural gas required for this is to be obtained CO2-free, but there are currently not yet sufficient quantities of it on the market. Therefore the company wants to compensate for the CO2 emission immediately with the purchase of certificates.