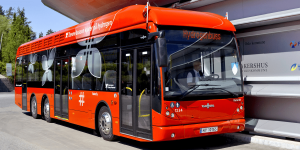 The public transport operator Qbuzz has ordered 20 fuel cell buses from the Belgian manufacturer Van Hool for use in the Dutch provinces of Groningen and Drente. An order was also placed for a hydrogen fuel station.

The vehicles are scheduled to go into operation in December 2020. Because of their targeted range of 350 to 400 kilometres, they will then be used on intercity routes in the two provinces in the north of the country. In total, Qbuzz has ordered over 164 electric buses, and battery electric buses are to be used on the city lines – including at Ebusco, VDL and Heuliez.

The Groningen Drenthe transport authority has also awarded Shell the contract to build a hydrogen fuel station in the city of Groningen and to supply the hydrogen. There is currently only one hydrogen filling station in the two provinces, an industrial plant operated by Nouryon in Delfzijl. But that would have meant a detour of 35 kilometres – to avoid this, a plant is now being built in Groningen.

The order follows a field trial: two hydrogen buses have been in regular service since December 2017. Both the pilot bus project and the 20 buses in Groningen are supported by the Ministry of Infrastructure and Environment, the EU via the FCHJU project and the provinces of Groningen and Drenthe.

For Van Hool, this is the second largest order for fuel cell buses after the 40 H2 buses for the German cities of Cologne and Wuppertal. According to Van Hool, it has already built 131 hydrogen buses, 21 of which have even been exported to North America.