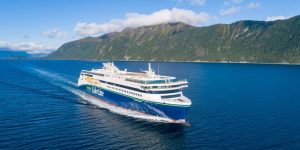 The allegedly world’s largest plug-in hybrid ship will soon begin sailing between Sweden and Norway. The Color Hybrid has now been delivered by the Ulstein shipyard to the Norwegian shipping company Color Line.

With a length of 160 metres and a width of 27 metres, the ship can carry 2,000 passengers and 500 cars. The maiden voyage is scheduled for August 9 from Sandefjord to Strømstad.

The batteries with a capacity of 5 MWh weigh 65 tons. In order to charge the batteries, a rapid charging facility was set up at the quay in Sandefjord. According to the shipping company, the batteries can be charged within an hour. In order to further improve the propulsion and energy efficiency of the ship, in addition to the battery, there is also a heat accumulator that absorbs the waste heat from the engines – so that the heat can be used elsewhere in the ship without the need for additional energy.

With the diesel-electric drive, the vessel will go silently in and out of the fjord of Sandefjord without emissions of harmful environmental gases, or nitrogen and sulfur compounds to air in the area.

“The construction of the world’s largest plug-in hybrid ship is in line with the company’s ambition to develop sustainable and environmentally friendly solutions for Norwegian shipping,” said Trond Kleivdal, CEO of Color Line. The ship’s footprint was also taken into account during construction: Over 70 per cent of the suppliers come from Norway.

The new hybrid ship shows how electrification on the water is picking up speed. Smaller boats have been equipped with electric propulsion for some time, but now the electric propulsion also reaches larger ships: Nidec had recently presented a serial hybrid drive for a luxury yacht, Danfoss Edistron electrified a car ferry and the Swedish port of Luleå has put hybrid tugboats into operation. And in Denmark the world’s most powerful electric ferry will soon be in operation.