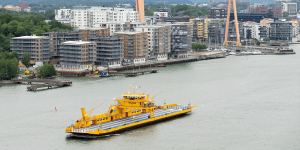 Danfoss Editron supplied the electric drive system for Sweden’s largest hybrid car ferry to date. The ferry is now about to go into operation. The 100-metre Tellus ferry can carry 80 cars and 297 passengers per tour and will operate with a battery capacity of 949 kWh mainly in fully electric mode.

According to the press release, the Tellus ferry will “mainly operate on fully-electric mode”, which will help contribute to the government target of becoming free of fossil fuels by 2045, and operate on one of Sweden’s busiest maritime routes, transporting over 100,000 vehicles per month.

For what is to be the largest hybrid ferry put into operation so far in Sweden, Danfoss collaborated with Baltic Workboats shipyard. The batteries, provided by Corvus Batteries, are charger overnight at an onshore charging station, but can also be charged via the diesel engines during operation. The operator also plans to install automatic charging stations at the harbour to charge the ship during operation hours.

The Tellus ferry also features the Editron load control system which automatically manages the system to minimise fuel consumption when the hybrid system is active. When powered in hybrid mode, the motor runs on a single genset, with the rest of the power coming from the batteries.

Jani Hartikka, Project Manager at Danfoss Editron, described the changing face of the maritime sector in the Scandinavian countries, which the company has played no small part in: “Similar ferries are already in operation in Finland and Norway, so we are thrilled to see Sweden joining the movement. The electrification of the marine industry is a trend which will continue to grow as more countries introduce legislation related to reducing emissions in the sector. The versatility of our Editron system means that we can provide fully-electric and hybrid solutions for any kind of ferry. The future of the marine sector is definitely emission-free.”