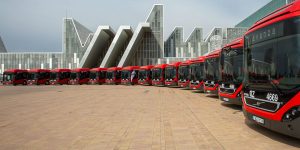 Zaragoza plans to put a total of 76 hybrid buses into service. The Volvo buses from the first batch will be used on lines 42, 44, 52 and 53. In September, 18 hybrid articulated buses will be added to the fleet.

With the hybrid buses, Zaragoza wants to reduce CO2 emissions by 30 per cent and NOX and particle matter emissions (PM10) by up to 95 per cent. Noise pollution is also to be minimised. In the Volvo 7905 Hybrid vehicles, auxiliary systems such as the doors, air conditioning and power steering are also electrically operated, further reducing fuel consumption since the system is fully functional even without the diesel engine. With hydraulic or pneumatic systems, the combustion engine usually has to run to drive the corresponding pumps.

In addition to the hybrid buses, a pilot project with electric buses is also planned: At the end of July, the city government approved the addition of four all-electric buses to the fleet. From September, two electric buses each from the manufacturers BYD and Irizar are to go into operation.

In addition, the city government has approved the creation of four all-electric buses: Two electric buses each from the manufacturers BYD and Irizar are also scheduled to go into operation in September of this year. With BYD the K9UB model will be used, while the Spanish manufacturer’s model designation was not mentioned in the Zaragoza Municipality’s communication. Together, the four electric buses cost around 2.8 million euros.