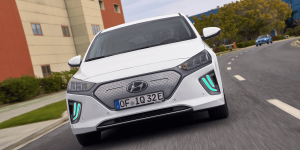 In the Hyundai’s new Ioniq range, the new Ioniq Electric BEV has considerable technical improvements that include a larger battery, up from 28kWh to 38.3kWh and a more powerful motor, up from 88kW to 100kWh. The new model allows drivers full control of the fully-adjustable regenerative parking with 1 pedal driving and smart regenerative braking.

These benefits also extend to the HEV and PHEV versions in the Ioniq range: Whilst the electrified 1.6 GDi, 6-speed DCT powertrains for new Ioniq hybrid and new Ioniq plug-in hybrid are carried over from the previous models, both vehicles now also include driver-controlled regenerative braking. Other changes to all variants include Bluelink – Hyundai’s smartphone app for connected car services enabling drivers to carry out a number of different functions whilst away from their vehicles. It seems all models, both in the Ioniq range as well as the Kona hybrids, now feature 10.25” touch screen navigation.

The hybrid Ioniq versions start at £22,795 and the Ioniq Electric “Premium” starts at £29,450 after the Plug-In Car Grant (PICG) is deducted. The new Ioniq range will be in showrooms from 5 September this year.

Hyundai’s Kona hybrid range, which will be on sale in the UK from 30 September this year, takes its drivetrain from the proven Ioniq Hybrid, with the Kappa 1.6 GDi Atkinson Cycle combustion engine working with the 1.5kWh battery and 32kW motor with 6-speed dual-clutch transmission.

Hyundai says of their Kona hybrid range that “..the New Kona Hybrid responds to customers’ demands for more SUV-bodied eco-mobility models.” Like the Ioniq, the Kona hybrids feature the Bluelink remote control capacities that include remote door control as well as indicators where the vehicle is parked, refuelling locations and parking spots. The range starts at £22,495 for the Kona Hybrid SE, the Kona Hybrid Premium starts at £24,295, and the top of the range Kona Hybrid Premium SE models start from £27,195. Hybrid versions of the popular Kona model will be on sale from 30 September. For British drivers wanting a fully-electric Kona the UK Hyundai website the company says: “Please note: Due to high demand, Kona Electric is no longer available in 2019. To reserve one of the next available cars you can add your details to our waiting list.”

With the Kona and the Ioniq, Hyundai already has successful electric cars on offer but both stand on shared platforms with combustion vehicles and hybrids. In June this year, the South Korean company announced that they are about to complete a purely electric vehicle platform, with the prototypes to be ready this year.