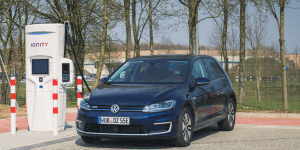 In the UK, the Advertising Standards Authority (ASA) has ruled that a Volkswagen ad should not be broadcast on UK television according to new rules against gender-stereotyping.

The ad shows men doing all kinds of adventurous activities, while the women depicted asleep and look after children. The ad slogan is “When we learn to adapt, we can achieve anything.”

Volkswagen insists its ad was not sexist and that caring for a newborn was a life-changing experience about adaptation, regardless of whether this was done by a man or a woman. The ASA ruled that the “ad presented gender stereotypes in a way that was likely to cause harm.” In new rules introduced at the beginning of this year, ASA regulations concern depictions of men and women engaged in gender-stereotypical activities to help stop “limiting how people see themselves and how others see them and the life decisions they take”.

This is not the first time the ASA has focused on car advertising, past examples have been more concerned with otherwise misleading content. At the end of 2017, the scrutiny of the ASA hit advertising for the BMW i3, which despite its range extender was praised with terms such as “zero-emission” and “clean” –  misleading advertising according to the ASA. But that’s not all, BMW has had some other trouble with its advertising campaigns in the past.

In October last year, a Nissan Leaf ad was banned because the ASA ruled that there were inaccurate details about the charging time required. In January this year, the ASA dismissed complaints against a Mitsubishi television advert for misleading consumers by over-playing the electric aspect of its Outlander PHEV SUV. Although the ASA dismissed the claim, in their ruling they also said that they understood why the complaints were made because of the repeated emphasis in the voice-over on the phrase: “it’s electric” implying that the vehicle was fully electric rather than a hybrid vehicle.

In the question of car advertising generally and most specifically electric cars, a study showed that car companies generally contribute comparatively little to the budgets for the promotion of their electric vehicles.

VW, on the other hand, was ready to spend millions ahead of the arrival of its first electric car reportedly. Either way, in response to the ruling, VW might want to question the effectivity of a message promoting adaptation to something (fairly) new – electric mobility– while at the same time operating with old gender stereotypes. VW has not been issued a fine or banned from airing the ad elsewhere outside of UK TV broadcasting.

Flying above the water without emissions (videos)