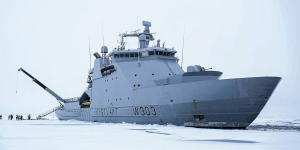 The KV Svalbard, built in 2001, was on its way in Arctic waters as part of the Coordinated Arctic Acoustic Thermometry Experiment (CAATEX). The expedition aims to place seabed sensors with which scientists could monitor water temperatures in Arctic waters. Such sensors at and around the North Pole are now expanding the researchers’ database.

“We were able to navigate through the Arctic waters and reach the North Pole faster than we thought possible,” said Ottar Haugen, commander of the Norwegian Coast Guard. “This is a significant milestone for us and a proof that we have a vessel in our fleet equipped with a robust propulsion system that enables operations in the harshest ice conditions – all the way to the North Pole.”

The ship is equipped with two 5MW Azipod engines. These are propeller nacelles in a submerged pod outside the ship hull and can rotate 360° to increase manoeuvrability, which is essential for icebreakers. The Svalbard can break through the ice over two metres thick.

There is an electric motor in each pod. However, it does not receive its power from a high-voltage storage tank, but rather from a serial hybrid: the ship’s diesel engine drives a generator that generates the necessary electricity.

With the Azipod system, ABB claims to be one of the six largest manufacturers of propeller nacelles. The Swiss company has delivered electric propulsion systems to over 90 icebreakers or ice-going vessels with a propulsion power of up to 45 MW. Options for Azipod propulsion span 1MW to 22MW and the technology has played a crucial role in developing ABB’s position for environmentally-friendly electric propulsion.