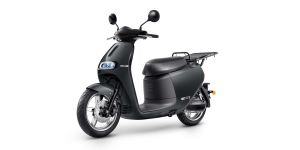 The Gogoro 2 Utility is a B2B is a version of Gogoro’s electric scooter tailored for logistics and delivery fleets and powered by a comprehensive network of battery swapping stations.

For the endeavour, Gogoro is cooperating with motorcycle and bicycle parts and accessories manufacturer TIC Corporation who will exclusively sell the Gogoro Utility scooter in South Korea.

“Seoul, like most of the world’s major cities, is at a tipping point and in desperate need of sustainable transportation solutions, not just for consumers but for businesses,” said Horace Luke, Gogoro founder and CEO. “The entire Gogoro ecosystem offers businesses a path forward that is sustainable, scalable and proven.”

After being founded in 2011, Gogoro initially focused on the development of its e-scooters. In Europe, one of their most important partners is the scooter-sharing service of Bosch, Coup. Just in July this year, the Taiwanese company its portfolio with the launch of a vehicle-sharing platform GoShare, when the company announced that it would introduce its own GoShare sharing service in several cities around the world at the end of 2020. In addition to scooters, the core of the product range is the well-developed network of battery exchange stations. This platform was initially being launched in Taiwan, and is intended to serve as a turnkey solution for partners, and deals with manufacturers, including Yamaha, that will make scooters using Gogoro’s technology, including its swappable batteries.

CEO Horace Luke says the company has always seen itself as a platform company, with the goal of providing a turnkey solution for energy-efficient vehicles. Gogoro develops most of its technology in-house, including scooter motors, telematics units, backend servers and software.
Battery swapping makes sense at a time when battery technology is developing at a fast rate, yet electric vehicles themselves can be long-lasting and robust. In July last year, a Honda and Panasonic announced a project in Indonesia to trial battery swapping for electric motorcycles.

With Gogoro’s new alliance with TIC Corporation in South Korea, the rapidly growing company branches out with new business models targeting business clients instead of consumers.