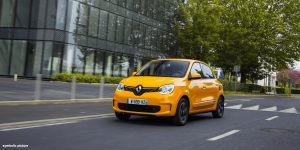 It is no secret that Renault intends to offer a total of eight fully electric models by 2022. Now, a model plan reveals which other battery-electric vehicles Renault is planning.

For 2021 the plan mentions a still-nameless electric compact SUV and for 2022 the Twingo Z.E., which will be positioned below the Zoe. Renault currently offers six BEVs: The Zoe, Kangoo Z.E., Master Z.E., Twizy as well as the City K-ZE, which was initially intended for the Chinese market, and the Renault Samsung SM3 Z.E., the South Korean counterpart to the Fluence Z.E., which has been discontinued.

Even before the new BEV models, some model series are to be equipped with a hybrid or plug-in hybrid drive – the first vehicles have been announced for 2020.

Back to the electric models: The electric Twingo is announced in the graphic as Twingo IV Z.E., based on the fourth generation of the small car. The current model sold since 2014 is the Twingo III. However, a Twingo IV without a Z.E. suffix is not included in the list – so it is possible that the Twingo will only be available on the market with electric drives.

However, little is known about the “SUV compact électrique” announced for summer 2021. It will very probably be based on the CMF-EV platform of the Renault-Nissan alliance – a version of the “Common Module Family” specially developed for electric drives, on which vehicles from the A to the D segment are based. No electric vehicle is currently based on the CMF-EV: The Zoe is based on an independently developed Clio, i.e. a converted CMF-B car. The Nissan Leaf is based on the Nissan EV platform.

In the UK, Renault also published the pricing and technical specifications for the new Zoe, which has a WLTP range up to 245 miles, using a 52 kWh battery and 100 kW motor. Faster charging is now also available up to 50 kWh DC, which allows for 90 miles of range per 30 minutes of charging, according to Renault. Prices start at £18,670 after subsidies, ranging up to £25,670 for the fully outfitted vehicle. Renault will begin accepting orders in mid September, with deliveries expected to begin in January 2020.