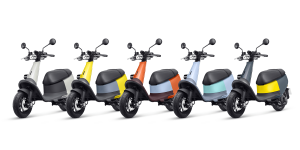 The Gogoro Viva is ultra-light and broadly affordable. It weighs just 80 kilos and costs around 1,800 US dollars. With a  top speed of 50 km/h and a range of 80 kilometres, this light electric vehicle is made for the city. The Gogoro Viva has an output of 3 kW and comes with one instead of two replaceable batteries.

Gogoro says the Gogoro Viva makes use of “electric powertrain, smartphone connectivity and battery swapping in a lightweight urban design for shorter, quicker trips.” The lack of expense and power has not detracted from the scooter’s high-tech appeal – The Gogoro iQ Smart Keycard with NFC connectivity unlocks and starts the VIVA with one touch. With advanced facial recognition, fingerprint sensors and passcode security from the user’s smartphone, the VIVA is nearly impossible to steal.

“VIVA was created to live at the intersection of urban transportation and self-expression and designed to empower a new era of commuters around the world,” said Horace Luke, founder, and CEO, Gogoro Inc. “We are always looking for opportunities to create solutions that enable broader access to sustainable urban transportation and this smaller lightweight category of polluting 50-100cc gas scooters was a natural segment to introduce a Gogoro Smartscooter.”

On the eve of their global expansion, Gogoro’s combination of high-tech, low-price and gridless energy use (through battery-swapping) makes Gogoro scooters appealing in both highly industrialized countries as well as those with little or no industrial infrastructure.

Battery swapping makes sense at a time when battery technology is developing at a fast rate, yet electric vehicles themselves can be long-lasting and robust. In July last year, a Honda and Panasonic announced a project in Indonesia to trial battery swapping for electric motorcycles. But Gogoro is really head and shoulders ahead with their light vehicle and battery swapping solutions. Since the Taiwanese company launched its first Smartscooter and the battery-swapping Gogoro Network in 2015, the company claims that with over 200,000 Gogoro electric scooters sold, this means more than 125,000 battery swaps per day, with 50+ million total batteries swapped to date.

While mobility providers like Coup in Europe are using Gogoro and expanding their business exponentially, in Africa where infrastructure is patchy, the low-cost, battery-swapping vehicles can leap-frog infrastructural hurdles with relatively little infrastructure investment. The smart stations can dynamically adjust battery charging rates depending on demand, and can even offer bidirectional charging to power local grids during power outages.

Gogoro has moved very fast, after only having introduced its first Gogoro Smartscooter and the Gogoro Network to Taipei, Taiwan in August 2015. Gogoro now has a battery-swapping station every 1 km (0.6 miles) in Taipei. The Gogoro Smartscooter was the world’s first high-performance, smart electric two-wheel vehicle with swappable batteries. Gogoro then launched lighter and faster performance models in mid- 2019 and in August just passed, the Taiwanese company launched the Gogoro 2 Utility – a B2B is a version of Gogoro’s electric scooter tailored for logistics and delivery fleets, initially in Soul, Korea, but also aiming for other international markets.

Horace Luke explained that the VIVA is one of the last steps Gogoro needs to make before the company is ready for international expansion: “Today’s announcement is part of our plan of working towards going overseas. The VIVA is one of the last puzzle pieces that we are putting in so that when we do go overseas, we have more to offer than a single electric scooter design. We won’t be a one-trick pony.” Gogoro has not yet revealed exactly which countries it will be expanding into.

The Taiwanese company is apparently still determining the type of sales model it will use internationally. Gogoro may choose to use the model currently used in Taiwan, where you can buy a scooter but not the batteries,  instead paying a monthly subscription of between $10-$30 US dollars for access to the battery swap network. Of course, Gogoro may also begin in some markets by selling the scooters and batteries outright, with owners charging at home. With removable and portable batteries, electric scooters are often easier to charge than electric cars and won’t get caught in traffic jams.