Tesla could deliver more than 100,000 electric cars for the first time this quarter. This was indicated by Elon Musk in an e-mail to employees. It has also been announced that production of the Model 3 will start at the Tesla plant in Shanghai on October 14.

It looks as if Tesla will break the 100,000 EV delivery barrier in the current quarter. In order to achieve its own ambitious annual target, this would also be direly needed. As is well known, the Californian company is sticking to their optimistic forecast of 360,000 to 400,000 deliveries for the year. The company confirmed this in its letter to shareholders on the latest quarterly figures. By way of comparison, Tesla delivered a total of 158,200 vehicles in the first half of the year. Even to reach the lower target level, Tesla has to deliver more than 100,000 vehicles in the third and fourth quarters. 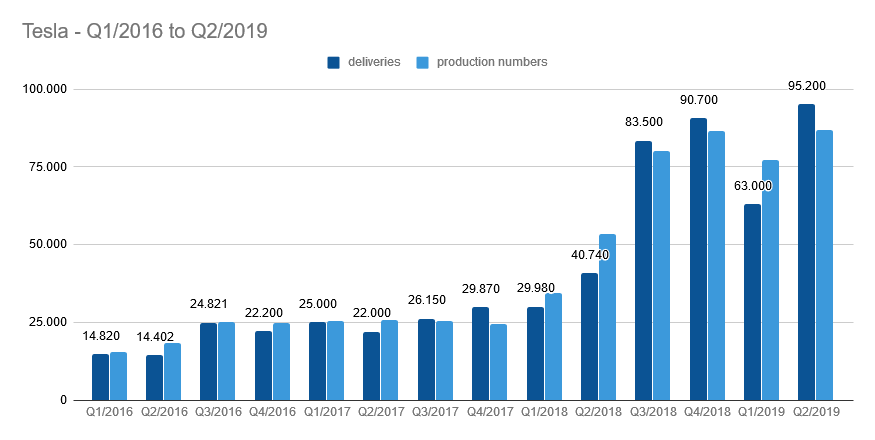 According to an internal communication to staff, this is possible: “We have the chance to reach our first quarter with 100,000 deliveries,” Musk says in an e-mail published by Electrek to his employees. The demand is so strong that Tesla could book 110,000 orders. The challenge is to get the cars to the customers quickly,” it continues. To achieve this, Tesla must mobilise as many resources as possible by the end of the quarter. On the stock exchange, the announcement gave Tesla shares a powerful boost: the price rose by more than six per cent – more than it has not done in almost four months.

Meanwhile, it has become known that production of the Model 3 at the Tesla plant in Shanghai is scheduled to begin on October 14. At least in the important Chinese electric car market, deliveries could soon become easier if the cars no longer have to be imported. In the second quarter of the year, the Gigafactory had already installed machines and systems in the halls in order to produce a “more cost-efficient” version of the Model 3 this year, according to the latest annual report.

And last but not least, Tesla is currently starting to install its software update 10.0, initially in the USA. Other markets will follow soon. This will make it possible, among other things, to stream videos – such as Netflix content – when the car is stationary. Essentially, Tesla wants to score points with the update, especially in terms of entertainment.