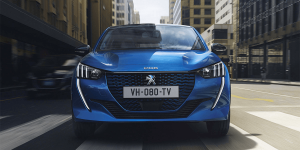 The new Peugeot 208 and its all-electric version e-208 can now be ordered from all dealers and branches of the brand in Germany. For the e-208, Peugeot is calling for an entry-level price of 30,450 euros. Deliveries are scheduled to start at the end of this year.

After the company had begun accepting non-binding reservations starting in early May, the electric 208 can now be ordered for German customers with immediate effect. The international launch of the vehicle has yet to be announced, however it is expected that the other European markets will follow soon.

The e-208 starts at a price of 30,450 euros, but is not available in the basic version Like, which is thus better equipped than the cheapest combustion engine version currently available. The most expensive outfit GT, on the other hand, is only available as an electric vehicle.

This makes the electric Peugeot somewhat more expensive than its sister model: for the Corsa-e, Opel charges at least 29,900 Euros – with the same technical data. Not yet known is the price of the third model in the group, the DS3 Crossback E-Tense. As the premium brand, however, the DS is likely to be priced more expensively than the Opel and Peugeot.

The new 208 was officially unveiled at the end of February, and production at the Slovakian PSA plant in Trnava is already underway. The electric version of the small car will have an output of 100 kW and will offer a WLTP range of 340 km thanks to a 50 kWh battery. The other performance data and optical features of the e-208 were unveiled at the presentation. Therefore only in summary: In sports mode, the vehicle accelerates from 0 to 100 km/h in 8.1 seconds. The charging power is 11 kW (AC) or 80 kW (DC). Visually, the small car is similar to the Peugeot 508, not least because the 208 is seven centimetres longer and four centimetres lower than its predecessor.

VW is guaranteeing 8 years of battery life on the ID.3