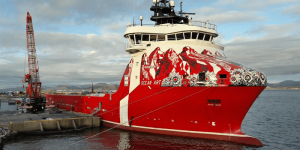 Wärtsilä will convert two supply vessels of the Norwegian operator Atlantic Offshore to hybrid propulsion. The Finnish technology group is developing and supplying battery packages for this purpose, which are to be installed in the Ocean Star and the Ocean Art by the beginning of 2020.

In concrete terms, these are 746 kWh battery systems that will soon be installed on the two ships at the Fitjar shipyard in Norway. It is helpful that both ships have already been designed by Wärtsilä and run with their engines or electrical systems. In this respect, the Finnish company says that battery technology can be seamlessly integrated into the existing control systems. After the conversion of the ships, Wärtsilä will also carry out the obligatory tests and sea trials.

The first ship with Wärtsilä’s hybrid drive went into operation in July. It is an escort tug in the Swedish port of Luleå, which was built with a specially designed drive. In August, Wärtsilä also announced that it would convert Acta Centaurus to hybrid propulsion, a Dutch-owned offshore wind farm installation ship, before the end of the year. The company first published its new hybrid retrofit solution for ships in February of this year.