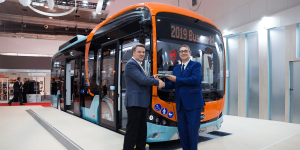 The order has now been confirmed at the BYD stand at Busworld in Brussels by Ole Engebret Haugen (CEO) and Hans Petter Sundberg (CTO) of Vy Buss as well as Javier Contijoch (Vice President of Sales) and Edison Yin (Regional Manager Nordic) of BYD Europe.

Update 01 July 2020: BYD delivered the first 15 of the 55 electric buses ordered by Vy Buss. These are eight 13-metre solo buses and seven 18-metre articulated buses, which will be put into service in Haugesund city centre on routes 201 and 202.

According to BYD, Vy Buss is the first public transport operator to receive the latest generation 13-metre electric bus. The model is expected to have a greater range and more flexible charging options. When the remaining copies from the order will be delivered is not mentioned in the notification. In the order placed before the Corona pandemic, the second quarter of 2020 was still specified as the delivery date for all 55 vehicles.