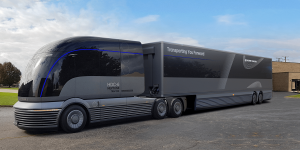 The HDC-6 Neptune is a semi-trailer truck that would classify as a Class 8 vehicle in the USA. The aerodynamic body of the fuel cell truck is visually reminiscent of Streamliner trains or Airstream trailers. A continuous windshield and the “ribs” in the lower area dominate the front. Not only the headlights but also the radiators are integrated into this section.

At the fair, Hyundai combined the fuel cell semi-trailer with clean energy refrigerated concept trailer. The trailer, called HT Nitro ThermoTech, was developed for transporting cold goods, but thanks to a nitrogen cooling system, Hyundai says it has a 90 per cent better CO2 balance. Thanks to the better insulation, the trailer should not only be cooled more quickly but also operate silently.

Hyundai has not yet provided performance data for the drive of the HDC-6 Neptune, but a press conference is planned for the North American Commercial Vehicle Show. Hyundai is not only focusing on hydrogen because of the efforts of the South Korean government. “For commercial vehicles, fuel cells are the perfect fit for heavy-duty trucks and long driving distances due to higher drive range, higher payload, less refuelling time and ultimately lower costs,” the company said. Hyundai did not reveal any further details about its plans to enter the US market – only the statement that it was “looking for opportunities”. If so, then with hydrogen: “Hyundai will start exploring opportunities in the United States commercial vehicle market, as well as being open to working with other partners to pave the way to establish a hydrogen ecosystem for commercial vehicles.”

In Europe, Hyundai’s fuel cell truck is already more concrete but much less futuristic. By 2025, Hyundai intends to bring a total of 1,600 fuel cell trucks onto the Swiss market. The first 50 Hyundai H2 XCIENT are to be delivered as early as 2020. Two fuel cells each deliver 95 kW, the hydrogen stored in seven tanks gives the zero-emissions semi-trailer a range of 400 kilometres.