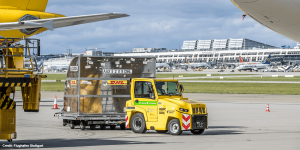 In future, the four electric cargo tractors will handle freight transport at Stuttgart Airport emissions-free. “In 2018 we first started using zero-emission battery-operated technology to handle passenger and baggage movements on the apron. We have now done the same in the cargo sector by replacing diesel-powered cargo tow tractors with the emission-free Goldhofer vehicles,” says Arina Freitag, Managing Director of Flughafen Stuttgart GmbH.

With 36,000 tons of airmail and airfreight per year, the freight volume at Stuttgart Airport is rather low compared to other German airports. The airport had already electrified the passenger buses and baggage tractors for the passenger aircraft. According to an airport spokesman, the new tugboats for the cargo terminal already meet the target of reducing the carbon dioxide emissions of the entire handling operation by 80 per cent compared to 2009. Since 2017, the airport has been using synthetic fuels in special vehicles for fire brigade or winter services, for which no electrical alternatives are yet available.

According to a press release, the reasons for the replacement are the operational and economic efficiency improvements associated with the new vehicles and the promotion of sustainable environmental compatibility – energy savings, emission reductions and noise reductions.

The Sherpa E was developed with this in mind. In the course of the increasing electrification of the airport industry, Goldhofer decided to offer the new cargo tractor not only in a diesel version as part of a platform strategy, but also to develop an electric version together with Suncar HK.