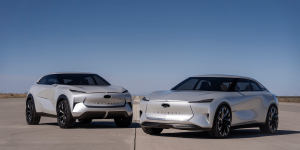 Nissan’s luxury brand Infiniti has published some more details about its electrification strategy under the motto “One platform, two powertrains”. In addition to electric cars, these include “petrol-powered EV models”.

What this means is that Infiniti, as previously announced, intends to offer all its models from 2021 onwards either with pure electric drives or with Nissan’s e-Power technology. With this drive, the combustion engine is not used directly for propulsion, but as a generator for charging the battery.

Infiniti has now announced that the brand’s future electric vehicle platform is designed for two electric motors – one on the front axle and one on the rear axle. The electric motors will deliver between 185 and 320 kW, depending on the vehicle. The all-electric cars are expected to offer ranges of up to 300 miles (480 km).

For the hybrid versions with an additional combustion engine, Infiniti relies on small batteries with a capacity of between 3.5 and 5.1 kWh depending on the model – there will be no charging port, the batteries are charged exclusively via the combustion engine. This will be a 1.5-litre three-cylinder petrol engine.

With this type of hybrid drive, Infiniti aims to unite “the best of both worlds” – the spontaneous acceleration of an electric motor with the range and fuel station network of a combustion engine. However, Infiniti did not provide any information on the efficiency of the engine or fuel consumption. The hybrid is also a “bridge to full electrification” for customers who are not yet ready for a fully electric vehicle.

The Japanese competitor Honda relies on a similar drive concept for its hybrids. The CR-V Hybrid and the recently introduced Jazz Hybrid also largely use the electric motor for propulsion, while the combustion engine functions most of the time as a generator.

The design will be based on the Q Inspiration, Qs Inspiration and QX Inspiration studies presented in recent years – the most striking feature will be the elimination of the classic grille. Infiniti plans to sell only electric and hybrid cars from 2025 onwards. However, these models will not be available in Germany, as Nissan’s luxury brand will be withdrawing from Western Europe at the beginning of 2020.