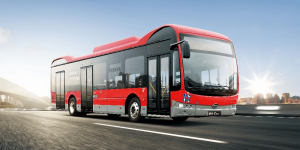 The 12-meter buses are to be delivered in the second quarter of 2020 and will be used on routes in and around the Norwegian capital Oslo. “Unibuss is a significant new customer,” says Isbrand Ho, Managing Director of BYD Europe. “and the company’s order for 23 vehicles is a demonstration of its confidence in BYD’s eBus product and its trust in the BYD brand.”

Unibuss itself justified the decision in favour of the Chinese manufacturer more with sober figures. “As a leading bus operator of electric buses in Norway, it is important for Unibuss to follow the global marked development”, says Øystein Svendsen, CEO of Unibuss. “BYD delivered the most attractive and cost-effective offer for electric buses for this tender over all”. Unibuss already uses 40 Citea Electric buses from VDL.

For BYD, however, this is the second major order from Norway within a few weeks: At the Busworld trade fair in October, Vy Buss ordered 55 electric buses, which is one of the largest single orders to date for BYD from a European public transport operator.

Update 02 July 2020: BYD has just handed over the 23 electric buses that were ordered in October to Unibuss. The 12-meter buses will now be in operation on several routes in and around Oslo. Just a day before, BYD handed over the first 15 of a total of 55 ordered trolleybuses to the Norwegian operator Vy Buss.